The ground beneath Tuluwat, the Wiyot village, is an enormous clamshell mound (or midden). This mound, measuring over six acres in size and estimated to be over 1,000 years old, is an irreplaceable physical history of the Wiyot way of life. Contained within it are remnants of meals, tools, and ceremonies, as well as many burial sites.

At the end of the 19th century, settlers built dikes and channels on the island. These modifications changed tidal action along the shore, resulting in erosion of the edge of the mound. Between 1913 and 1985, an estimated 2000 cubic yards of the shell mound were lost to erosion, which continues and seems to even be accelerating. In addition, the shell mound was the site of uncontrolled digging in the early part of the 20th century. One amateur archeologist was said to have looted as many as 500 of our gravesites. In addition, structures of the Tuluwat village that were still visible in 1913 are now gone, having been destroyed or carried away by wind and waves.

It is imperative to prevent further destruction of the mound. The planned restoration will eliminate continued erosion and looting while creating and enhancing wildlife habitat.

As part of the survival of the Wiyot culture, the Wiyot Tribe established the Wiyot Sacred Site Fund to purchase back portions of Indian Island as they became available and other sites of religious and/or cultural significance for future generations and for those of today. The Wiyot people who have gone before us and those who are to come would like to invite you to contribute generously to the Wiyot Sacred Site Fund and help heal the past to make a dance for future generations to come.

Through grassroots fundraising, and with the help of the community and individual donors, the Wiyot Tribe was able to purchase back 1.5 acres of the historic village site of Tuluwat on Indian Island in 2000.

The Eureka City Council made history May 18, 2004 as they unanimously approved a resolution to return approximately 45 acres, comprising the northeastern tip, of Indian Island to the Wiyot Tribe. Indian Island will be protected from inappropriate development because all zoning and land use restrictions will be in place. In the return of the 60 acres that the City Council passed, there are measures that assure that this will remain the case by prohibiting a change in status or transfer to anyone else, except back to the City of Eureka. 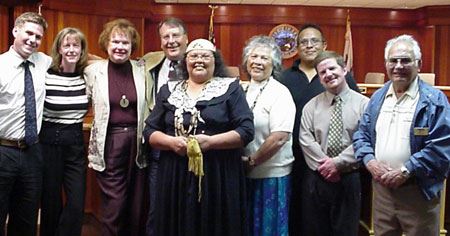 We know of no other city in California that has taken an action as bold as this, and that has a tribute to its indigenous people so prominently in its midst. We wish to express our profound gratitude to the Eureka City Council, and staff, for their visionary and courageous action, and commitment to an enriched inclusive community.

Goal of the Tuluwat Project

The goal of the Tuluwat project is to restore the cultural heritage and ecological resources of the site and surrounding salt marsh, to construct a cultural center open to the public, and to restore the site to once again perform Tribal ceremonies there. But in order to realize these goals, the Tribe first had to clean up the site, which was the site of a ship repair facility from approximately 1870 to 1990. Tons of scattered metal, wood debris, and hazardous materials littered the area, along with several dilapidated structures and contaminated soil.

The Tribe has been in the process of cleaning up the debris and pollutants left on the village site since its purchase. A vast majority of the metal and wood debris has been removed, all but three of the structures were demolished, and the most contaminated soil was excavated. The next steps are to finish the sheet piling for erosion control, rebuild the dock and bulkhead, and install a geotextile and soil cap over the site.

The Natural Resources Department has spearheaded several ongoing restoration activities at the Wiyot village site of Tuluwat on Indian Island in Humboldt Bay. The overarching project, the Indian Island Cultural and Environmental Restoration Project (IICERP), is very complex because of the multiple cultural and environmental conditions that exist at the site: historic injustice, insensitive ecosystem and manipulation, archeological & cultural significance, environmental contamination, and physical isolation all play a part in the project execution.

The Natural Resources Department collaborates with the Wiyot Cultural Department and tribal community, along with a large number of state, federal, and local community agencies and consultants in the ongoing program of improving the environmental and cultural quality of the Tuluwat site. Specifically, the environmental department has acquired funding from the National Park Service Historic Preservation Fund, US EPA Brownfields Program, California Integrated Waste Management Board, the Center for Creative Land Recycling, the Lannan Foundation, California Cultural and Historical Endowmentand others to move the project forward.

These funds, as well as the Tribe's Sacred Sites fund, have allowed the Natural Resources Department to realize the removal of contaminated material, over 60 tons of scrap metal, and many tons of garbage; completion of a brownfields assessment and remediation plan; erosion control achieved through installation of 450 feet of composite sheetpiling backfilled with 300 cubic yards of imported fill; and native plant landscaping over portions of the site. Still ahead, of course, are brownfields project completion (including in-site contaminant remediation) and site re-development, as well as restoration of the salt marsh surrounding the Tuluwat site.