There are no remaining fluent speakers of Wiyot (no one alive today grew up speaking Wiyot as their first language). However, there is a great deal of documentation of the Wiyot language that was compiled when the language was still spoken natively. These materials include written word lists, texts, and grammatical descriptions dating from the late 1800s to the 1960s, as well as audio recordings of songs, words and phrases, and narrative texts from the 1950s to 1960s.

Below is a sample of what some of the written materials look like in their original form. Digitized versions (typed and annotated, with spelling converted to the Council-approved spelling system) of some documents are available for download, and more will follow as materials continue to be digitized. 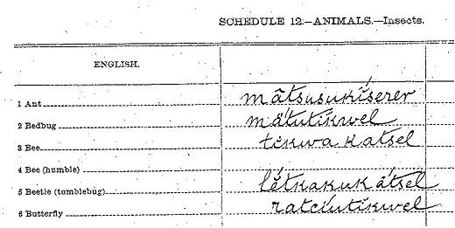 Transcripts and links to archival audio recordings of three native Wiyot speakers can be found at the links below:

Complete Picture of the Language

Because these documents were created by many different researchers, each of whom had a different system for writing the language, and contain information given by Wiyot speakers from different dialects and time periods, it is a challenge to form a complete picture of the language.

'Language revitalization' refers to efforts to bring endangered languages (languages with very few native speakers) back into broader use in a community by teaching the language to non-fluent or semi-fluent speakers. But can a language with no fluent speakers be brought back into use? It may be more difficult, but Wiyot would not be the first community to try it: revitalization of ‘extinct’ or ‘dormant’ languages (also called ‘language revival’) is underway in the Miami (Oklahoma - also an Algic language) and Mutsun California tribes; and modern Hebrew was revived from religious and traditional texts after centuries during which it was used only ceremonially.